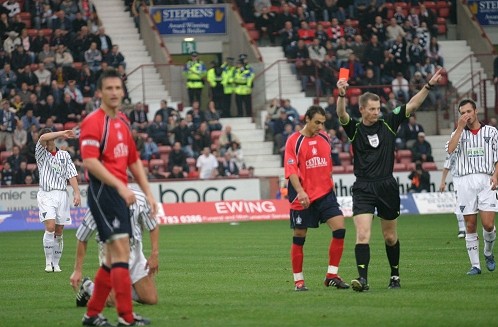 
Jim Leishman got a taste of what its like to manage the Scottish international side when he received late call offs for this match. Lee Makel was by far the biggest loss but there was no Mark Burchill and Greg Shields was forced into combat possibly ahead of preferred schedule. Gary Mason returned however for his first game since 28th August and Simon Donnelly was back on the bench. Falkirk made no changes from the side that held Hearts to a 2-2 draw a week past Sunday.

This was the big match as far as both sets of supporters were concerned. The love hate relationship between these clubs had actually seen Falkirk fans delighted that Dunfermline were not relegated last season. Leishman`s Houdini act meant that the Bairns fans got their wish to return to West Fife in the top flight. Falkirk`s first league match at East End Park since January 2000 and the Pars were looking to repeat the victory secured almost exactly two years ago in the CIS Insurance Cup as the visitors kicked off defending the goal in front of their very vocal travelling support.

Referee Kenny Clark awarded Falkirk rather a soft free kick on the edge of the Pars box within 60 seconds when Russell Latapy lost his footing but the break from defending it almost led to Dunfermline opening the scoring. Derek Young latched on to the clearance and sent Mason scurrying up the right wing. His ball into Bartosz Tarachulski was perfect and the tall Pole`s shot from 8 yards was worthy of a goal but the all yellow Falkirk keeper turned the effort around his right hand post for the first corner of the match.

The first quarter of an hour passed with little further goalmouth incident. Latapy continued to get too much of the ball for comfort and Dunfermline only looked positive when Tarachulski got hold of the ball. The 19th minute brought another good chance when Liam Horsted drove into the left side of the Bairns box and cut back to Tarachulski whose shot from just six yards was blocked and then Horsted`s follow up was sent behind off Glennon for another Pars corner which they failed to use to their benefit.

Scott Wilson`s tackle on Daryl Duffy earned the visitors a 24th minute free kick that Latapy fired around the four man Pars defensive wall from 25 yards and wide of the left goalpost. McGregor`s first `save` of the match was required to hold a soft Thomson header two minutes later. Horsted was seeing must more possession and his driving runs wee obviously worrying the Falkirk defence. He won a disputed corner in 27 minutes that again Dunfermline wasted with pushing in the box.

A 34th minute free kick given for Craig Ireland`s challenge on Derek Young allowed Darren Young to float over a ball that Scott Thomson headed wide left. Just as well it was wide since the Assistant Referee`s flag was up for a bemusing offside decision. Falkirk then had their best effort of the game so far as Latapy and Duffy combined to lay off an inviting ball to Alan Gow. Allan McGregor touched the shot from just outside the box around his right post.

McGregor could do nothing to stop the visitors taking the lead just five minutes from the break. Daryl DUFFY received a pass from Latapy before turning Scott Thomson on the top of the penalty area and thumped the ball home to send the Falkirk supporters delirious. The goal certainly set the match alight and Steven Thomson flashed another ball across the face of McGregor`s goal before the Pars response came to life.

Dunfermline drove forward and won three free kicks around the Falkirk penalty box as the time ran down. Milne was yellow carded for his tackle but Darren Young`s delivery was easily forced clear. Rodriguez took down Thomson but Wilson could not get enough on Darren`s next free kick sent into the Falkirk box. Another free kick resulted from Ireland`s challenge on Tarachulski and this time skipper Thomson took the responsibility but his effort was deflected over the bar so it remained 1-0 to Falkirk at the turn round.

On the resumption it was the dayglo crimson shirted visitors who threatened first with a speculative shot from Lima. Dunfermline were driven back as yet again they conceded territory. The half time talk seemed worthless and it took them seven minutes before a long ball from Zambernardi let Horsted in the shoot high over the bar.

A Mason free kick turned the pressure back on to Falkirk with Scott Thomson relentless in pursuit of an opening. The attack broke down and when Duffy raced to the other end he had the choice of two unmarked colleagues as he crossed from the right. O`Donnell met the goalscorer`s pass but McGregor pulled off a fine save to deflect the ball wide of his right post with just 54 minutes on the clock.

Glennon dived at the feet of Tarachulski when Horsted swung in another good ball and both sets of fans rallied behind their teams creating a rowdy atmosphere. Dunfermline took more from the higher tempo and forced free kicks and corners to no effect. A long ball towards the Falkirk goal then brought controversy as Glennon held the ball outside the box. A free kick was all that resulted from an act that used to have keepers seeing red. Zambernardi rocketed in a shot from 18 and 1/2 yards that Glennon grabbed after it rebounded off his chest.

The red card that we thought Kenny Clark had forgotten was brandished to Falkirk captain Craig Ireland for a last man tackle on Tarachulski midway into the Falkirk half. This was the big striker`s last action as he was subbed by Andy Tod and Noel Hunt came on for Derek Young. There was stacks of urgency in the Pars play but the opening could just not be found despite the Bairns being a man short and playing 4-3-2 heading for their first victory at East End Park in 14 years. Andy Tod headed a Shields cross over the bar and then another from Gary Mason was sent the same way. Darren Young had a good shot blocked and after Donnelly provided Hunt with a pass that set up Greg Shields but his header was over the bar.

In 87th minute Scott Thomson fired a low shot on target from 15 yards only for Glennon to pull off a fantastic left handed save that sent the ball behind for a corner from the right. Nipper was again on the end of Horsted`s delivery but this time the keeper touched it on to the right post.

Four corners in the first two minutes of the three added kept the intense pressure in the goalmouth in front of the McCathie Stand. After Zambernardi`s shot was blocked Thomson looked certain to get the equaliser with a header but again Glennon leapt from nowhere to divert the ball over for another corner.

Falkirk keeper Mark Glennon had some remarkable saves in the last ten minutes but he was not tested enough before that.

Although Dunfermline finished strongly with even their keeper up for a corner they had pumped too many high balls into the Falkirk defence where the tall defenders had coped with ease. The Pars failed to find any route through the Bairns defence and despite no end of effort it was the old rivals who took all the points back across the Forth.