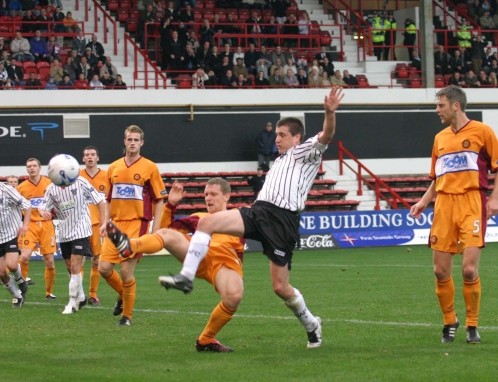 
Dunfermline`s resources were stretched for this important home match with the management needing to borrow two under 19 squad in John Dunn and Calum Smith, to complete the complement on the bench. With Yannick Zambernardi suspended following his red card against Hibs on Wednesday night Iain Campbell returned to the left side of defence. In the absence of injured strikers Mark Burchill, Derek Young and Bartosz Tarachulski, Simon Donnelly to made his first start since 20th August and the Pars still without the services of Scott Wilson, Andy Tod continued in central defence alongside Scott Thomson.

Motherwell made two changes from the side trounced 5-0 at Celtic Park in midweek; Paul Quinn and Phil O`Donnell coming in for Fagan and Hammell.

Pre match entertainment from Scotland`s no.1 club mascot involved Sammy the Tammy dressing up for Halloween in a ghost outfit no doubt hoping that the Pars could spook Motherwell with a result that would haunt Livingston and Falkirk. The fact that the Pars mascot emerged from under the white sheet without a head had no worries for Jim Leishman since signing a new 30 month contract.

As has become customary the appropriately pumpkin colour shirted visitors kicked off defending the goal in front of the East Stand that was barely 25% full. McGregor was the first keeper in action gathering a Jim Hamilton shot within 50 seconds but the early play certainly didn`t suggest that this game was game too much of a treat or trick. Lee Makel drove free kick in from a useful position 22 yards out but straight into the four man `Well wall.

In 8th minute the Pars started knocking on the visitors` door and Noel Hunt`s cross that whizzed through the six yard box was unlucky not to be converted by the leaping Gary Mason. Greg Shields bolstered the Pars hopes trying a long range effort and then swinging in a better ball for Hunt. Makel kept the shots coming having a go from 25 yards out in 12 minutes but firing wide right.

Pressure continued towards Smith`s goal with Donnelly feeding Hunt for a run down the left and moments later Hunt sending over a good ball that Donnelly could not convert. Motherwell on the other hand were losing possession far too easily invariably booting away the ball without finding a man and getting caught offside when attempting to counterattack.

After dominating the first quarter Dunfermline let the visitors enjoy more possession and territory. Scott MacDonald had a header wide of target and then from a long throw on the right in 27 minutes, Richie Foran headed down for MacDonald to test McGregor with a driven shot from 8 yards. One chipped effort over the bar was all the Pars could offer before with just four minutes to the interval a free kick on the edge of the box when Kinniburgh was penalised for his challenge on Hunt, led to a near thing. Makel poked the ball into the six yard area and Andy Tod rose to head the ball towards the left side of the net but Graeme Smith pulled off a fantastic one handed save and Scott Thomson was closed out as he tried to pick up the scraps at the far post.

Half time Dunfermline 0 Motherwell 0
Sammy`s Golden Square draw made by Bartosz Tarachulski for £3000 was won by number E048, Tom Matthews from Glenrothes.

Makel and Mason got the second half underway for the Fifers but within three minutes they lost their skipper having to come off injured to be replaced by Aaron Labonte. The home support reached pumped up the decibels as their side began to show fight and intent. Donnelly pushed an inviting ball along the 18 yard line but Gary Mason failed to produce a shot. Then when Craig Wilson returned the ball from the right for Hunt to leap high and head on target but Smith blocked and his defence blootered the ball out for a corner.

Iain Campbell sent in a perfectly placed ball for Tod to nod down to Donnelly but the Pars man just couldn`t execute the killer blow. Next minute Smith fisted away Wilson`s cross right to Makel but his 53rd minute effort went over the crossbar. Just when things were looking up for Leishman`s side Motherwell`s Brian KERR placed an eerie silence over the home support as he dispossessed Lee Makel and shot in from 30 yards four minutes later.

The house of horrors had certainly arrived at East End Park when just six minutes later a ball swung over from Phil O`Donnell was met by Jim Hamilton who out jumped Campbell and provided CORRIGAN with Motherwell`s second.

Dunfermline`s reply came with Makel setting up Darren Young for a header he sent narrowly wide left of goal. Ideas were lacking as the Pars vain efforts to penetrate the visitors defences came to nothing. The high ball into the box was being easily soaked up by the opposition and they came close to adding to their tally when O`Donnell got the better of Andy Tod as the big man tried to shield the ball out for a goal kick. The `Well no.10 trapped the ball on the line and MacDonald looked certain to score until McGregor pulled off another fine save.

Andy Tod was thrown into attack but with ten minutes remaining Dunfermline paid the price as MacDonald picked out Foran on the left. He travelled to the byeline and laced a ball on to the six yard line that Labonte could only divert to the feet of Jim HAMILTON. The former Par accepted the invitation and had no difficulty in picking his spot to ensure Dunfermline`s Halloween lantern was never going to get lit.

With a creepy chill descending over East End Park the Steelmen continued to trouble the Pars with counterattacks and registered their first win at Dunfermline since 2001. Motherwell were no guisers and with the home support booing their side off following renditions of "What a load of rubbish" it will need some real wizard-like work now to lift Dunfermline from their lowly SPL position.

The final score did not reflect the Pars performance or effort and Terry Butcher conceded after the game that his side were unworthy of a three goal winning margin. The fabulous strike to put them ahead against the run of play installed the confidence that pushed them on to a convincing victory.