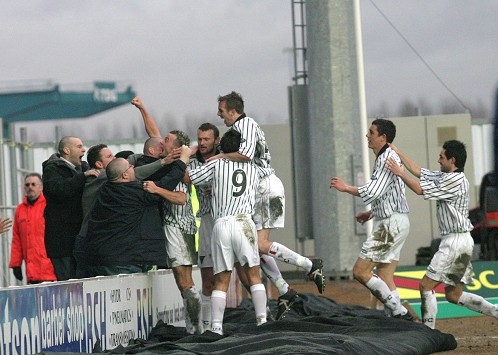 
The Pars fans were out in force as Dunfermline made their first visit
to the Falkirk Stadium at Westfield. All 1900 tickets for the away end
were taken up and the stadium was a sell out for the Hogmanay fixture.
Falkirk seeking their first ever SPL win at their new home made two
changes from the side trounced at Tynecastle on Boxing Day. Rodrigues
and Thomson start instead of Alan Gow and the suspended Stephen
O`Donnell. Dunfermline`s change from the side that drew against Rangers
were McGregor for Halliwell and Jamie McCunnie for the suspended Lee
Makel.

The Falkirk announcer raised the mood playing Cher`s Gypsies, Tramps
and Thieves prior to listing the Pars team but no Fifer would worry if
the three points could be grabbed to take back along the A985. The home
side kicked off playing south to north defending the goal at the shed
end.

The match started cautiously with Dunfermline having slight advantage
territorially. A Mark Burchill cross from the left touchline was
defended out to Darren Young but his well struck, and on target, 30
yarder was blocked.

Andy Tod stopped a strong run by Daryl Duffy conceding a free kick
that earned him a yellow card right at the top of the penalty box in the
centre of the D. After the eight man wall was built Russell Latapy
scooped his shot into the Dunfermline fans behind the goal. The Bairns
forced two corners in 10th minute but after Greg Ross headed the first
behind, teven Thomson made a complete mess of the attempt at goal from
25 yards.

A 19th minute break by Burchill was punctuate on the edge of the
Falkirk box when Craig Ireland`s challenge pushed him off the ball. No
whistle despite the loud claims from the away fans at the other end.
Four minutes later Burchill`s clever run to get on the end of McCunnie`s
chip into the right side of the box allowed a cross that Gary Mason
blasted high and wide.

Falkirk always looked capable of a quick break and Duffy fed Latapy a
ball that he tried to flick over Allan McGregor from 10 yards but the
grey shirted keeper had no problem clutching the ball out of the air.
Back at the other end Craig Ireland headed clear after his keeper Matt
Glennon had been drawn out towards Burchill.

A neat pass from Shields was left by Hunt and allowed the ball
through his legs for Burchill to cross but Dunfermline still couldn`t
take advantage of their increasing pressure. It was looking better for
the Pars but Falkirk gave them a big fright in 32 minutes. Latapy`s
break had defenders trailing in his wake and he laid off a good delivery
into the path of Duffy. With McGregor coming out but failing to get the
ball there was immense relief as the ball came back off the crossbar.

Scott Wilson was off the park getting treatment for a leg knock when
Ireland`s header at a Latapy corner was really well saved on his line by
McGregor and the following two corners were well dealt with by the
Dunfermline defence. The 42nd minute brought Dunfermline`s first corner
of the match after Greg Ross had been sent down the right by Scott
Wilson. Burchill was on the end of McCunnie`s cross after the heads of
Wilson and Thomson had flicked the corner on but the striker`s shot was
blocked.

Next a Scott Thomson free kick from the left side was initially
defended but when the ball was played back into the right side of the
Falkirk box Noel Hunt`s turn was blocked and the ball broke back to
BURCHILL. He advanced along the 18 yard line before drilling a shot from
the edge of the penalty spot. Glennon could only tip it into the net as
the Pars went one up in the 45th minute. Darren Young and Greg Ross got the second half underway as the Pars
fans struck up in full voice - probably the greatest chorus since
Hampden in 2004. They just had to hope that the second half at Westfield
wasn`t the same as that day. It took five minutes to create any
goalmouth action. When Rodrigues was yellow carded for stopping Hunt on
the left, the free kick was sent into the Falkirk box but Ross was
presented with a clearance but his looping header was easily held by
Glennon.

Latapy evaded the challenges of Wilson on the left side of the
Dunfermline penalty area and McGregor did well to save with 51 minutes
gone. Just six minutes later as Scott Thomson was off the field for
treatment Darren Young sent the free kick in to the far post where Noel
HUNT leapt high above the defence to head in goal number two. Hunt was booked for over celebrating as he went to the barrier where
Pars fans and players piled in. The Irishman produced another run
quickly after and when the ball fell for Burchill his shot unfortunately
went high over the bar. John Hughes committed his third and final
substitute with 25 minutes remaining. Falkirk came at the Fifers as they
dropped deeper with substitutes McBreen and McStay looking particularly
threatening but it was their most recent entrant that provided the ball
that halved the Pars lead.

Alan Gow sent the ball in from the left flank and Daryl DUFFY swept
it home from six yards in 68 minutes. There was a brief sortie forward
as Scott Thomson headed a free kick narrowly over the crossbar and then
in 70 minutes a Gow shot looked destined for the net but the ball broke
back off the crossbar and McBreen failed to turn the rebound in. More
Falkirk pressure ensued and Ireland headed another chance wide left.

An 85th minute free kick from Alan Gow looked as though it was the
second Falkirk goal. It swerved round the five man wall but the right
goalpost was all that stopped a goal. There followed some further
desperate defending as the home support urged their team forward. Aaron
Labonte was brought on for Noel Hunt and Nipper move forward with two
minutes left.

The three added minutes were seen off with McGregor touching the ball
over the crossbar. After Falkirk sent the corner kick on to the wrong
side of the roof of the net the Dunfermline fans celebrated singing and
dancing like never before this season. You`d have thought they had won
the Cup and the players for their part celebrated equally
enthusiastically.

So courtesy of Motherwell`s last minute winner at Almondvale the Pars
are back off the foot of the table and they intend not to return there
in 2006.